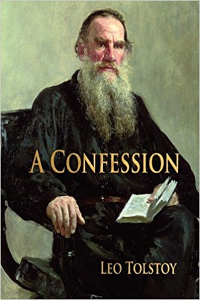 "A confession" is one of the greatest works by Leo Tolstoy (while the most popular "War and peace" or "Anna Karenina" do not belong to the rank according to the author himself). This work requires self re-evaluation and criticism in the face of the well justified evidence. It is a profound study made meticulously logical as if it were written by a mathematician or a scientist. However, the topic differs much from the usual pursuit of science: the reality of death and (inevitable) conclusions derived from it.

Besides other obvious benefits of the reading, the work is a logical continuation to our first affirmation of death, from which we have not arrived at any conclusions… just yet. The essay tries in a beautifully rigorous intellectual attempt to outline the meaning of the reality of death.

Tolstoy made an elaborate study of the topic through the prism of many other works of prominent philosophers and thinkers and weaved it into the perceptions of his own life. Thus, it is a good objective summary, although it might look like a biographical essay.