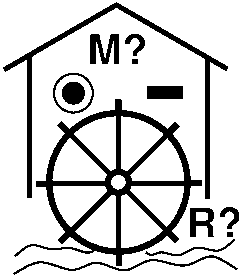 This effect is illustrated with the following:

Let us imagine a man whose only means of subsistence is a mill. This man, the son and grandson of a miller, knows well by tradition how to manage all parts of the mill so that it grinds satisfactorily. Without any knowledge of mechanics he adjusts the machinery as best he can, so that the flour is well ground and good and he lives and earns his keep.

But having heard some vague talk of mechanics, he begins to think about the arrangement of the mill and to observe what makes what turn.

From the mill-stones to the rind, from the rind to the shaft, from the shaft to the wheel, from the wheel to the sluice, to the dam, and to the water, he comes to the conclusion that everything depends on the dam and the river. And he is so delighted by this discovery that instead of testing the quality of the flour as he used to, and raising or lowering the mill-stones, clamping them, and tightening or loosening the belt, he begins to study the river. And his mill falls quite out of order. People begin to tell him he is making a mistake, but he disputes this and continues to reason about the river. And he concerns himself so much and for so long a time with this, and discusses it so eagerly and hotly with those who point out the mistake in his way of thinking, that at last he convinces himself that the river is the mill itself.

The miller's argument is logically irrefutable. The only way to undeceive him is to show him that what is most important in any argument is not so much the argument itself as the place it occupies, that is to say, that to think effectively it is essential to know what one should consider first and what later. He must be shown that a rational plan of activity differs from an irrational one in that its elements are arranged in the order of their importance: which should come first, second, third, tenth, and so on, while irrational plans lack that sequence. It is also necessary to show him that the decision of this order is not fortuitous, but depends on the purpose for which the activity is planned.

This ultimate aim also determines the sequence in which the separate reflections should be arranged so as to be sensible. An argument not connected with the end in view is absurd, however logical it may be.

The miller's aim is to grind well, and this aim, if he keeps it in view, will determine for him the indubitable order and sequence of his reflections about the mill-stones, the wheel, the dam, and the river.

Without such reference to their aim, the miller's reflections, however fine and logical and beautiful in themselves, will be false, and, above all, meaningless: they will be like the speculations of Gogol's Kifa Mokievich, who calculated what the thickness of an elephant's egg-shell would be if elephants were hatched from eggs, like birds.

And such, in my opinion, are the discussions of our contemporary science about life.